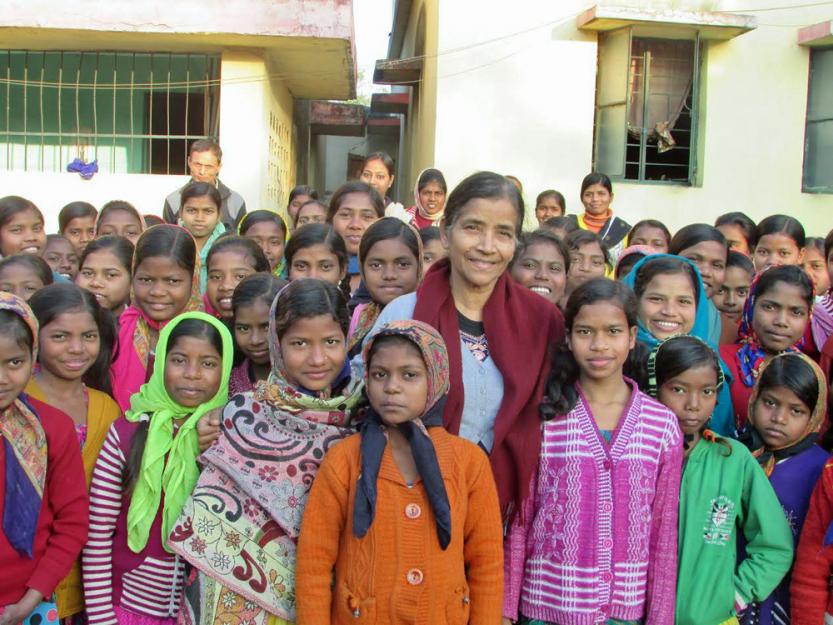 Let’s meet Sister Sudha who is yet another wonderful positve human sharing happiness on this Earth.

Sister Sudha Varghese is a social worker and Catholic nun in India. She has devoted herself to the Musahar, the Dalit of Bihar and Uttar Pradesh. one of the very lowest Scheduled Castes, even considered “untouchables”.  Sister Sudha is reaching out to girls from impoverished and marginalised groups, especially the Musahars, who have faced decades of exclusion.

Serving the poor was what took her away from her home in Kerala, southern India, to Bihar in 1964 to become a missionary. She took initial training with the Sisters of Notre Dame, and later was sent to the congregation’s schools to teach. Sister Sudha, who hails from Kottayam, Kerala, moved to Bihar in her late teens. Since then she had bought a massive change in the lives of Musahars, a Mahadalit community in Bihar.  Sister resides and works in Jamsaut, a village in Patna district, and is known as didi, which means elder sister.

Assisted by two younger nuns, she gathered women, taught them about their rights and protested injustice. She also obtained various government welfare benefits for them. To fight the legal battles, she studied law, particularly cases of rape, sexual harassment, and violence against women.

Sister Sudha Varghese has dedicated three decades of her life to live among “untouchables” in Bihar, India, and fight for their rights and education. She has been sending girls to school from the Musahar community for 20 years. Her institution, Nari Gunjan, has more than 1,500 girls enrolled and runs over 50 centres. In her home, she convened a group of teenage girls, to whom she taught reading, writing, sewing, and embroidery. Later, she opened five centres to teach girls vocational training in nutrition, sanitation, and money management

Sister Sudha brought revolutionary changes among the Musahar through Nari Gunjan (“Women’s Voice”), an umbrella organization she launched in 1987. It was started to coordinate multilayered activities such as education, advocacy and welfare services. She started teaching Musahar girls in 2001. She went after the unschooled and school dropouts and taught them about reproductive health, nutrition, cleanliness, sanitation, and small savings initiatives. In 2005 she established a residential school named Prerna on the outskirts of Danapur, Patna.

Her NGO, Nari Gunjan is active in five districts of Bihar and works through 850 Self-Help Groups. It is assisted by Bihar’s Mahadalit Vikas Commission and has introduced several successful programmes. Sister Sudha has also introduced livelihood programmes for the women of the community. They introduced poultry and goat rearing as alternative livelihood programme also. Today 750 families have kitchen gardens to grow their own vegetables and sell excess produce. They are also involved in making ‘chane ka sattu’ (a traditional nutritional powder made from chickpeas) at commercial level.

Sister Sudha’s organization also manages two child adoption centers that care for 26 girls. In another center, her volunteers tend to about 100 elderly women. They also manage a place for women rescued from human trafficking and run a program under the government-supported Jivika (“livelihood”) operation.

Sister Varghese has stated that she draws inspiration from B. R. Ambedkar, a Dalit who fought against the concept of untouchability and was one of the drafters of the Constitution of India. These days Sister Sudha is busy setting up a girls’ hostel in a building provided by the government, where Musahar girls will stay in their pursuit of higher studies.

In addition to the standard curriculum, Prerna also teaches arts and dance, and hired a karate teacher. Varghese felt that karate would give the girls “more self-confidence, and also self-protection”.  The girls of Prerna Chhatravas became so proficient that they won five gold, five silver and 14 bronze medals at a competition in Gujarat in 2011. Also earning a trip to the Asian Junior Karate Championships in Japan, where they won seven trophies. By 2015, some 2,000 girls from these education centres had received matriculation certificates. These girls today know the importance of education and hygiene in life. 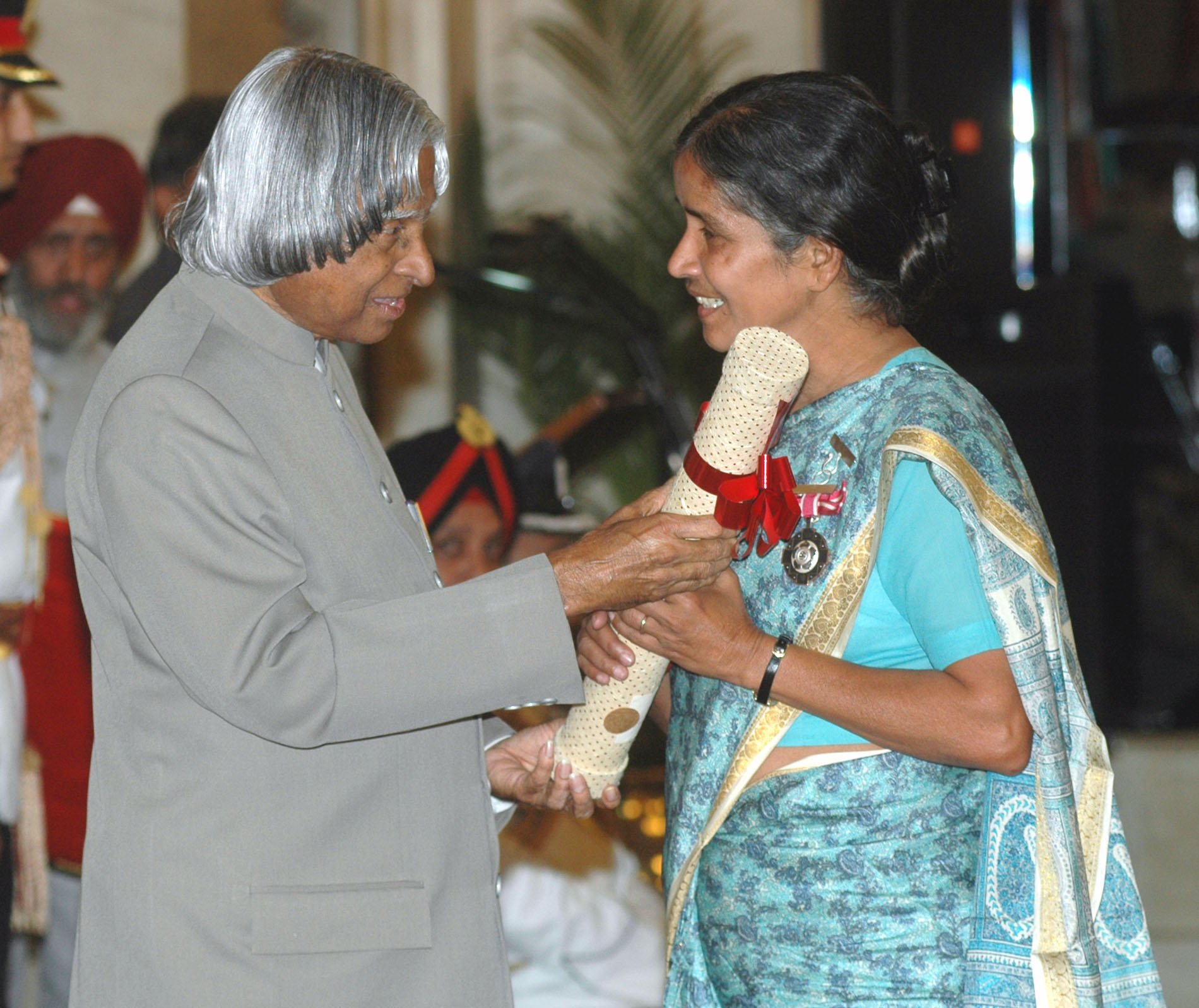 In 2006, the Indian government presented her with Padma Shri (“lotus honor”), the fourth highest civilian award in the country.  She was also awarded the ‘Icon of Bihar and ‘Vanitha Woman of the Year’ award in 2017.

Further accolades such as the Corporate Philips Good Samaritan Award, Bihar Saman Award in 2010, and Bihar Asmita Award have applauded her work in society time and again.

There are many unsung real-life champions who have helped or contributed towards the betterment of our society. Let’s learn from them and be a helping hand.

This is part of my Positive Humans series I have been writing on people who are an inspiration, motivation with their attitude of gratitude and ever helping nature. To meet such motivational humans click and read here.

This post is part of the #WATWB We Are the World Blogfest, a monthly event created by Damyanti Biswas and Belinda Witzenhausen to showcase stories of hope and light. “We Are the World Blogfest” which seeks to promote positive news. Sharing these stories that show compassion and the resilience of the human spirit increases our awareness of hope in our increasingly dark world. My co-hosts for this month are Shilpa Garg, Simon Falk, Damyanti Biswas, Lizbeth Hartz, and Eric Lahti.